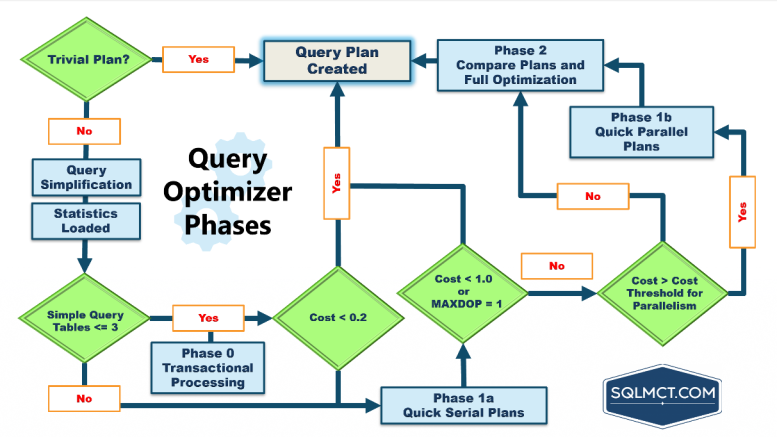 The query optimizer uses cost-based optimization to create an execution plan with the least cost, but that also consumes the least amount of resources. The Query Optimizer will not evaluate all possible combinations of plans but will create a “Good Enough” plan based on available information such as statistics and the data distribution.

The Query Optimizer goes through several phases in the process of query optimization. First it must determine if the query has a trivial plan. Especially, a query that has only one plan to consider, such as, a SELECT statement where all the columns can be found in a single table or index. If a trivial plan is found, this saves the query optimizer from having to evaluate multiple plans, which reduces the workload of the optimizer. If a trivial plan is discovered then the optimization ends, and the query plan is created.

When a trivial plan is unable to be generated, the query optimizer performs a simplification process to try to discover if unnecessary joins can be removed, operations can be rearranged, or commutative properties folded (Instead of 5 + 6, use 11 as a value). Additionally, before moving on to the next step, statistics, data distribution, and index metadata are added to the query tree.

Now the query optimizer will evaluate the query across three search phases to quickly identify the plan with the least cost.

Delete vs Truncate vs Drop

Using GROUP BY and HAVING