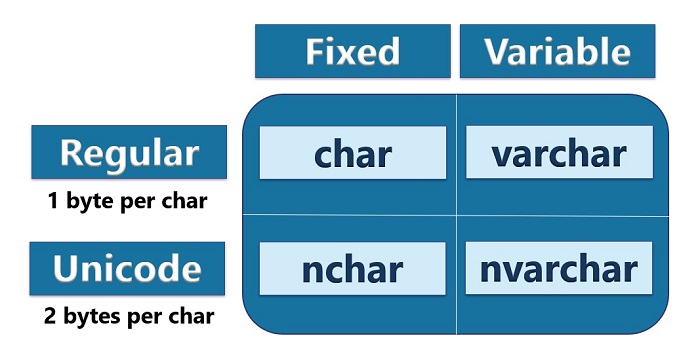 Both the char and varchar data types are considered regular or non-Unicode character data types where each alphanumeric character uses only one byte of data.

This contrasts with the Unicode character data types (nchar and nvarchar) that uses two bytes of data for each alphanumeric character. We will talk more about Unicode data types later in this post. But for now, we will focus on char and varchar.

An analogy of this would be if we made a reservation at a fancy restaurant for a table with ten chairs. If only five people showed up, then the restaurant would have the option to either charge us for all ten chairs, including those we did not use, or to take away five chairs and only charge us for the five seats we did use.

In the case where we were charged for the extra five chairs, this would be similar to the fixed length char(10) data type. In the case where we were not charged for the five extra chairs, this would be the similar to the variable length varchar(10) data type. However, instead of chairs, we are concerned about bytes.

To demonstrate our regular character data types, we will start with some sample code.

On lines 1 and 2, we are declaring two variables. The first variable named @String1 will be a char(10) data type. The second variable will be named @String2 with a data type of varchar(10).

Since this may be difficult to see, we will use two String functions to demonstrate this result. We use the LEN function to see how many characters are in each variable. As you see for both @String1 and @String2 it shows that each have five characters. (‘Hello’ for @String1 and ‘World’ for @String2)

You can think of Unicode as UNIversal code and the ‘n‘ in front of the data type names as Nationalized. The reason we would use this more expensive data type is for languages that have larger character sets. For example, the English language only uses about 85 values in its characters set. (Uppercase A-Z, lowercase a-z, 0-9, and then twenty special characters.) So, for the English language only one byte is needed to represent its character set. Therefore, Regular or non-Unicode character data types are used.

Now let’s use the same examples as above except we will add the ‘n’ in front of the data types. We will also add a capital N in front of the text strings ‘Hello’ and ‘World‘. This will explicitly convert the text data to Unicode data type. If the capital N is not included on our text strings, they will implicitly convert to the correct data type if only English characters were used. Using the capital N is to ensure that if a non-English character were added in the text string it would be converted correctly.

And if we look at the LEN function to see how many characters are being stored in the Unicode data types, again nothing changes in the results. Both variables still hold five characters each.

Now when we run the DATALENGTH function we will see the difference in the number of bytes used. You will notice that the Unicode data types use twice as many bytes as the Regular data types.

Prior to SQL Server 2008 you could use either the text or ntext data types if you need more characters than the limit. However, the text and ntext data types have been deprecated and either varchar(MAX) or nvarchar(MAX) should be used in those situations. For best performance though, you should right-size your data types to only use what you need. Additionally, as a precaution, always validate your data to protect yourself from SQL Injection attacks. Especially when using the MAX data types.

What is a Schema?