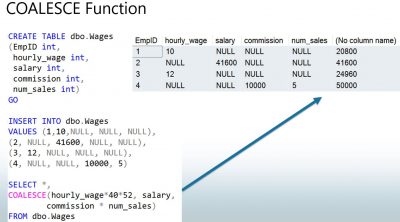 In a previous post we discussed using functions within SQL Server. The SQL COALESCE function is used when you want to combine values from a series of columns or expressions when they might contain NULL values.

The goal of this demonstration is to use the COALESCE function to find the annual salary of each employee. The first section of code is creating a table with five columns to hold sample data.

Next, we use an INSERT statement to add four rows of data to our demonstration table.

Now that we have our data ready, it is time to demonstrate the COALESCE function. The purpose of this function is to look for and act on fields that may or may not have a NULL value. (A NULL value is an absence of a value or an unknown value.)

Be the first to comment on "SQL COALESCE Function"